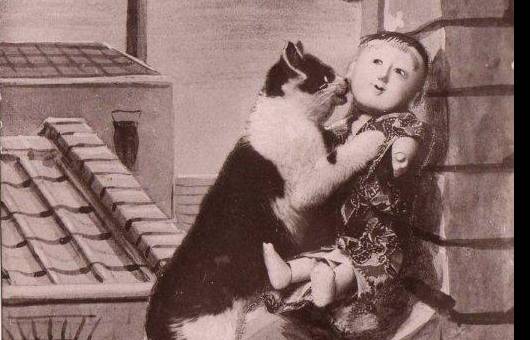 The most recent outing for Gail-Nina's extensive (and exquisitely random) collection of postcards ran from November 12th 2016 until January 14th 2017. In a change from its previous appearances, this time round the exhibition was showing at the Arts Centre, in Newcastle-on-Tyne's Westgate Road. There is a (lavishly illustrated) review in the Chronicle.

Selections from Gail-Nina Anderson's postcard collection have twice previously been exhibited at Newcastle's Literary & Philosophical Society, with follow-on shows elsewhere in the region.

The Postcard - a Voyage of Discovery, June - July 2013, was followed by The Pleasures of the Postcard: Small but Perfectly Formed, August 2015. The text which follows is Gail-Nina's intruduction to the topic, originally published as an article in The Crack.

Ready for the opening of the exhibition at the Lit & Phil

Now I'm not exactly a Luddite, but if there's one thing that a sparky tweet, email or digital message can't possibly hope to beat, it's the postcard. Not virtual, real - that dog-eared oblong of card you prop up on the mantelpiece, use as a book-mark or rediscover at the back of a cupboard a decade after it was sent. Postcards, you see, aren't just records of where your auntie spent her summer holidays - they also represent the ultimate mini multiple utterly affordable art form, with its own rules, aesthetic and logic (usually warped).

These things are designed to be bought, sent and received with pleasure, which seems a dubious prospect when examining some of them. Why would four minute monochrome views of Oban be made more appealing by the addition of a small scottie dog gazing mournfully out from the centre of the composition? Why would you send a picture of a kitten doing the ironing or a badly stuffed gorilla or a bleached-out view of Team Valley Trading Estate? No, don't try to answer that question - it's an instinctive thing. If you're one of nature's deltiologists then you'll understand at once why a mermaid advertising deodorant or a picture of a paella or 3-D view of the Lourdes grotto constitute cultural treasures impossible to discard.

And that is essentially what's on show downstairs at the Lit and Phil this month - an exquisite selection of cards I, personally, have failed to throw away. Best come clean - they weren't all sent to me. My modest hoard metamorphosed into a collection when I began buying them to keep instead of send. Then I discovered the stalls on Tynemouth Market, and the specialist fairs and all those sellers on eBay, and my fate was sealed. So who needs a life when you have an entire universe that you can constantly re-categorise, stick into albums or - joy of joys - arrange in frames and hang in an exhibition to be gawped at? 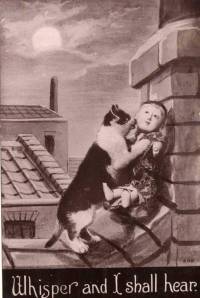 This show doesn't deliver the history of the postcard, because that would require just the sort of linear logic that the form so magnificently denies. It's a show of concepts, from the sentimental to the abstract, with a different theme to every frame. It's designed to make you wonder - wonder why I have so many pictures of elephants, why the caravan park should be a scene worth sending, what the message might be when you receive a card showing an ancient Egyptian sock?

The postcard, just because it is meant to be ephemeral, is also a tiny time-capsule. Each one a testimony to changing taste, they celebrate big-boned lasses in stripy swim-suits, outmoded forms of transport, curly-headed moppets cute enough to rot your dentures and ex-Prime Ministers. The lack of irony in early cards can be as staggering as their political incorrectness, reminding us that you could once send images of patriotic fervour through the post without an envelope or a worried look from the postman. And those glimpses into the past can also illuminate the present - were there really once buses running down Northumberland Street, did bikinis once look like polka-dotted nappies, and does anyone remember those giant pencils in the Eldon Centre?

The show isn't just for fanatics - I know, I've tried it out on really quite normal friends and most of them are still speaking to me. It's a chance to look close and enjoy the game of comparison and analysis without encountering the pitfalls of "high art". We can all be postcard patrons, considering colour effects, composition and iconography. Sometimes it's context that matters most - the First World War was a Golden Age for the postcard, where pictorial communication offered a relief from fraught conditions. You can come at them from any angle you like and always find something, even if it's only the eternal question of "why on earth...?"

Why add glitter to the photo of a Town Hall? Why publish a funeral card for the House of Lords? Why dress the kittens like a New Wave band, or send someone the recipe for haggis or a photo of fluorescent cocktails or a pizza? Just what is the irresistible appeal of rough seas? And those are all pretty mainstream ones - wait until we get into the weird stuff. Cards of crop circles and (collaged) ghosts and kitchen towel dispensers and waxworks of people you've never heard of vying with inexplicable musical instruments and Easter bunnies and (even worse) waxworks of people you have heard of but could never hope to identify. And that's before we even consider the dead monks, bone-decorated chapels and hank of Ancient Roman hair! (Ok, I'm prepared to admit that cards showing human remains may be a mite specialist but hey - somebody has to collect them.) It's free, friendly and only slightly obsessive - what's not to like? 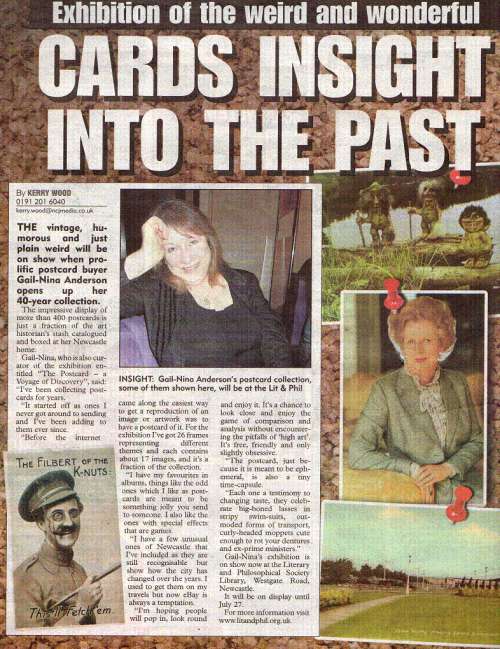 Press coverage in the Sunday Sun; see also The Journal's review (and sample illustrations) of the 2013 show, and of the 2015 show.