Phantoms at the Phil 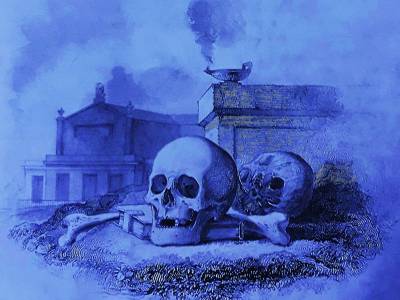 Phantoms at the Phil is a now-traditional event, established in December 2004: an opportunity to hear new ghost stories read by their authors in the atmospheric surroundings of Newcastle's extraordinary private library, the Literary and Philosophical Society.

Christmas is the traditional season for ghost stories, but the long midsummer evenings can be equally haunted, and the Phantoms last manifested on Tuesday 21st June 2022, when Gail-Nina Anderson and Sean O'Brien were joined by poet Linda France.

Phantoms at the Phil: the Brenchley Years.

Read an account in The Supernatural Tales blog of the Twelfth Night Proceedings of 2009.

Twelfth Night, Friday January 6th 2012, marked the departure of Chaz Brenchley from his accustomed haunts, but the remaining phantoms, Gail-Nina Anderson and Sean O'Brien continue to manifest. Their intention is to introduce fresh blood to the scene with a series of invited guests. On Tuesday June 19th 2012, the first of these fresh apparitions was David Almond, who claimed that his contribution, The Missing Link, was his first ghost story. The other stories were Sean O'Brien's Story Time and Gail-Nina Anderson's Collected.

They were queuing at the doors of the Lit & Phil on Friday 4th January 2013 - Tenth Night - for the first Christmas manifestation of the new-style Phantoms. Gail-Nina Anderson and Sean O'Brien welcomed as their star guest crime-writer Val McDermid, whose first ever ghost story offered an new answer to the old question "Where do you get your ideas from?" The stories, in order of reading, were:

Midsummer Phantoms manifested again in 2013, on Monday 17th June, when Gail-Nina Anderson and Sean O'Brien were joined by guest ghost Ann Cleeves. The stories, in order of reading, were:

Phantoms at the Phil entered its tenth year on Twelfth Night, Monday 6th January 2014 (or was it Twelfth Night? Gail-Nina's story addressed this question). Phantoms royalty Gail-Nina Anderson and Sean O'Brien welcomed playwright and short-story enthusiast Margaret Wilkinson as their guest writer. The stories, in the order of reading, were:

Summer Phantoms followed on Friday 20th June 2014; there is an account of this event at The Supernatural Tales Blog (where else?).

Midsummer being a time of mysterious appearances and disappearances, founding phantom Sean O'Brien was, at the last minute, unable to participate: heroic stand-in was Simon Morden, who, since he first manifested as a Phantom in December 2005, has emerged as a rising star in the world of science fiction. Simon read Whitebone Street from his collection Brilliant Things; regular phantom Gail-Nina Anderson read a new story, an exception among her tales in having a title: "Beelzebub has a devil put aside...". After the break, the proceedings were rounded off by Mark Valentine, a name well-known in the flourishing small-press world where traditional ghost tales are written, published and collected, with Seaweed Tea, a story of tides and seaweed designed to cast a shadow over any seaside holiday (published in Dreams of Shadow and Smoke: Stories for J. S. LeFanu).

Phantoms at the Phil completed its first decade on Tuesday 6th January 2015, a Twelfth Night event drawing the Christmas festivities to a close, when habitual haunters Gail-Nina Anderson and Sean O'Brien were joined by special guest, multi award-winning novelist Lesley Glaister. Spooky music sounded throughout the library, and refreshments were sponsored by Brewin Dolphin.

This year's stories were distinguished not only by their quality, but by the sheer variety of their settings: Gail-Nina Anderson's In the Pale Moonlight took place at an unnamed conference centre, immediately identified by all those in the audience who had been to Halifax's Dean Clough; Sean O'Brien's Keeping Count recounted the sombre events of a funeral in Venice; and Lesley Glaister's Beneath the Trees unfolded under the unexpected sunshine of a Scottish holiday.

Summer Phantoms 2015 manifested on Friday 3rd July - not, as founding phantom Sean O'Brien said in his introduction, for an amazing 374th time, but as part of living tradition in which participants have become so attuned to the etheric vibrations that the audience found it hard to believe that three so perfectly complementary stories had been composed without the slightest collusion between authors.

For the first time, Gail-Nina Anderson opened the proceedings with an untitled exercise in the macabre worthy of Sean O'Brien; and Sean responded with Verney's Pit, a tale of summer's end and the fairground on the border of town, with a dark undertow. Fortunately recurrent guest phantom Simon Morden's Diggers ended the evening on a humorous note.

On Twelfth Night, Wednesday January 6th 2016, regular contributors Gail-Nina Anderson and the mighty Sean O'Brien were joined by fabulous local crime writer Ann Cleeves (think the Vera and Shetland series) who now adds serious weirdness to her literary repertoire. The stories, in order of reading, were:

At the Epiphany 2017 manifestation, on Friday January 6th, guest Phantom Debbie Taylor, author and founder and editor of Mslexia: The Magazine for Women Who Write broadened the horizons with a tale of uncanny visitations in a village on the edge of the Kalahari desert. The tales, in the order of their telling, were:

At Midsummer Phantoms, on Thursday 22nd June 2017, the guest apparition was Tony Williams. Gail-Nina Anderson's story, Variant Versions, will be published in a forthcoming collection from Sarob Press - but you had to be there on the night to hear the sung version!

On Thursday January 4th 2018, Gail-Nina Anderson and Sean O'Brien were joined by Shelley Day. The stories, in order of reading, were:

Gail-Nina's An Eye for a Giant Eyeball is published in The Alchemy Press Book of Horrors.

At Midsummer 2018, persistent phantoms Gail-Nina Anderson (with a story called True to Nature) and Sean O'Brien were joined by recurrent apparition Margaret Wilkinson.

On January 3rd 2019, ahead of Twelfth Night so still within the festive season. Sean O'Brien broke with tradition by reading an unfinished story, the first two chapters of a novella in progress, concerning uncanny events on Newcastle's quayside; Gail-Nina Anderson's story Sweet Folly tempered its comedy with a darker edge. After the break, guest author Mark Valentine, master of the seriously strange tale, delivered a lecture on 'certain aspects of folklore', revealing the presence in the landscape of an unexpected variety of ghost.

Summer 2019 was even more haunted than usual at the Lit & Phil. It may have started with Midsummer Phantoms, but it didn't stop there. On Midsummer Eve, 21st June 2019, Gail-Nina read a brand new ghost story, alongside Sean O'Brien and their invited guest: but the hauntings continued into July. There were also ghost-hunting and spooky tours and stories...

On Tuesday 25th June, Gail-Nina was in conversation with Ann Cleeves, who reprised her ghost story Stranded, written for Midsummer Phantoms 2013. Two of Gail-Nina's Wednesday lectures also had a supernatural theme: one on Shakespeare's Ghosts, on 26th June; and one on Polidori's The Vampyre on 3rd July.

On Friday 3rd January 2020, within the canonical Twelve Days of Christmas, regulars Gail-Nina and Sean O'Brien were joined by special guest Kris Johnson for a suitably spooky set of seasonal stories, namely, in order of appearance:

After the hiatus caused by the pandemic, the manifestations resumed on Thursday 6th January 2022: resident Phantoms Sean O'Brien and Gail-Nina Anderson, unabashed by plague and postponement, were joined by author and genuine rocket scientist Simon Morden. The stories were:

Many of the tales contributed by Sean O'Brien to Phantoms at the Phil over the years are collected by Comma Press in The Silence Room and Quartier Perdu.