In a recent newsletter, Gail-Nina Anderson outlined the situation:

... And perhaps then we can seriously get back to thinking about lectures and courses, which I know have started to loom large in our minds. I have been looking into this, I promise, but everything depends on the ever-changing rules, the specific facilities at the institutions where I hire teaching rooms and audience expectations about comfort and safety. A lecture which could not include coffee or socialising, seated a maximum of 30 and involved the wearing of masks throughout might not really fit the bill. There has been some talk of delivering talks via Zoom but my technical expertise and equipment are both sadly lacking in this area and this doesn't seem like the best time to consider upgrading my computer or finding the necessary assistance to help me with new skills and systems. Personally I don't hugely enjoy watching Zoomed talks on screen and I positively loathe looking at my own face, but I have been discussing matters with the Lit & Phil and will let you know as soon as I have any feasible suggestions for you to consider.

So what's the excuse this time?

Early visit from Santa, big discount on supermarket wine, overwhelmed by the excitement of a take-out latte drunk al fresco on the church green? Why has there been no newsletter of late, to fill our lives with domestic trivia and political cartoons?

Well (and I cannot stress this strongly enough, for it's rare indeed that I can produce a genuine, inarguable, unavoidable reason for my natural inertia) the computer broke down! Oh yes - Saturday before last I was happily re-organising the art books in my office (a task that fills all possible time and space and can never logically be brought to an end, so offers the perfect occupation for a no-market Saturday) and had been using said machine to look up the odd bibliographic detail. Switched it off while I had lunch (because otherwise it offers the terrible temptation of surfing funny cat videos on Youtube while chewing, which as multi-tasking goes is not a good combination of activities) and when I switched it back on ... Well, you can fill in the ensuing chapter of cusses and desperate turnings-off-and-on-agains etc. Not quite dead as "on" light was illuminated, but absolutely sod all else. Calls to compu-literate friends brought only apocalyptic prognostications, and solitary ray of hope was discovering that Computer Repair Workshop in Gosforth would be open the following Monday. This is a wondrous place, offering the sort of service that eschews anything that you might call presentation values or consumer glamour in favour of a couple of blokes in a room full of unidentifiable bits of technology who speak in a terminology quite unknown to you (well, to me, at any rate) but whose obvious dedication to the business in hand inspires total trust. Said premises are above a charity shop and boast no more in the way of street frontage than a door that opens on to a staircase. Under current circumstances, there is a table across the bottom of this on which you can deposit your ailing machine, and a chap comes down and discusses your problem from halfway up the stairs. As you are both wearing masks, this exchange tends to be even more opaque than usual, and he neither makes promises nor tries to sell you anything, though he does opine, in the tones of someone who couldn't avoid a harsh truth if he tried, that neither the retrieval of data nor the survival of the machine can be guaranteed.

The following day I got a call -data has been retrieved and computer can be restored at the cost of a new hard disc drive - should he go ahead and order it? Thus I was only without the beast for a week, but it felt like longer. As I also watch streamed entertainment channels and play DVDs through the computer, not only was I deprived of Facebook and email, but I had to resort to watching actual TV if I wanted moving visual amusement! There's never much that I would choose to watch on today's telly beyond the soothing chopping and mixing that characterises the Food Channel, but as this also goes in for multiple repeats and has already hit seasonal mode, I swear I saw Jamie Oliver's technique for making your turkey gravy a day early so often that, even though I've never cooked a turkey, I could follow it in my sleep. (Wouldn't work anyway - I'd get to the point where you've oven-baked the chicken wings and instead of smooshing them up to make the base of the gravy, I'd just pick them out of the tray and eat them while they were crispy.)

Mercifully I managed to unearth a prime range of British black and white movies from the 40s and 50s, and am now beset by a terrible urge to roll up my hair and pad out my shoulders. "The Spy in Black" is a masterpiece, and what a tragedy that Conrad Veit turned down the chance to play "Dracula"! Among many other delights (including improbability) "Two Thousand Women" offered the earliest performance I've ever seen by Thora Hird, and "Private's Progress" is simply a roll-call of great British comedy actors. "Pimpernel Smith" featured Raymond Huntley as a Nazi officer and "Private's Progress" had a young Christopher Lee in a similar role and this constitutes another Dracula reference woven into the thread by my over-active Gothic imagination - while Sir Chris remains best known for playing the Count, the first person to play the role on stage was actually Mr. Huntley. One day, all this is going into a lecture, and you won't be able to avoid it.

The computer crisis has rather overshadowed my usual round of domestic trivia from Bayswater Road. I was going to tell you at some length about baking my first ever loaf of bread, while borrowing a shovel to scrape the moss off the path from the pavement to my front door (which must be at least a full yard long) would have become an epic rather in the mode of "Beowulf" but including all the expurgated chapters on the social politics of borrowing a shovel.

But politics do, of course, continue to obtrude onto even the most insulated world-view, and many fine visual comments on the painfully prolonged exit of the American president have been recently exchanged (thanks here to Peter, Heather and Sue.) I attach a couple of fine examples: 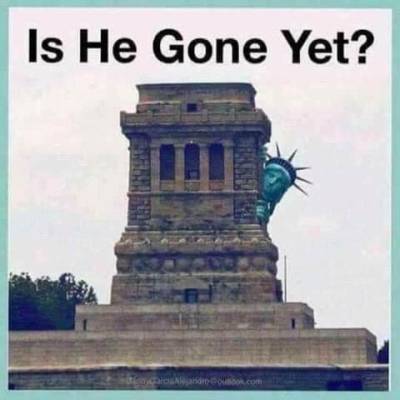 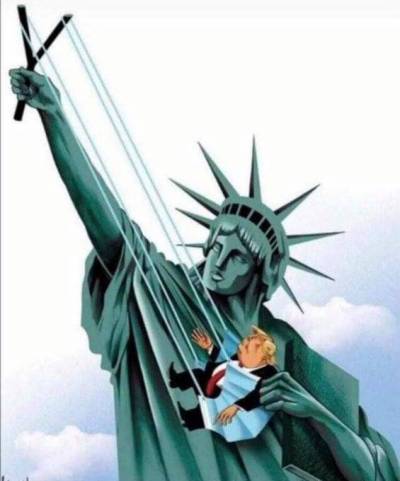 and before the topic of how to leave office with dignity has become totally passé, here's Randy Rainbow on the subject:

The original number, by the way, is "Don't Tell Paul But I'm Not Getting Married Today" from Sondheim's "Company", where a bride suffers a panic attack on her wedding day and so (naturally) sings a fiendishly difficult patter song about her feelings! Here's Madeline Kahn singing it:

Along with "Send in the Clowns" and "Ladies who Lunch" it's pretty much an iconic Sondheim number. Best performance I ever saw was by Sophie Thompson in a 1996 London production, but alas there is no available video of this.

A recently recorded gem of another sort (and thanks to Christa for this one) is a new, "isolated" production of Ravel's delightful L'enfant et les sortilèges: Fantaisie lyrique en deux parties, first staged in 1925 and still wildly inventive and surprising. The London Philharmonic Orchestra performs the music, the singers recorded their roles individually in their own homes and this semi-animated production was then assembled by video engineers - a method that suits spectacularly well with the whimsy of this piece:

And now the re-emergence of an old favourite - in a mood of seasonal cheer the BBC has decided to censor the lyrics of the Pogues/Kirsty MacColl song "Fairytale of New York" because they include the word (wait for it, wait for it...) faggot! Just in case you don't know the song (which is difficult to believe) I should explain that it's a distinct corrective to all Christmas-tide slush and sentimentality, offering instead a dialogue between a disappointed and disillusioned couple whose dreams have died. As such, their language towards each other is pointed and abusive (and extremely well-observed) but not quite what Radio1 deems appropriate for mellow seasonal sentiment, and over the years (it was recorded in 1987) some lines have been variously subject to alteration. The offending exchange is (please don't read this bit, Santa):

"You're a bum
You're a punk
You're an old slut on junk
Lying there almost dead on a drip in that bed
You scumbag, you maggot
You cheap lousy faggot
Happy Christmas your arse
I pray God it's our last."

On previous occasions, such as Top of the Pops, "arse" has been changed to "ass". This time it seems to be "slut" and "faggot" that are offending. Various substitutions have been suggested for the latter, with the line changed to: "You're cheap and you're haggard" though the most inventive one inspired by the current controversy and posted online has to be:

"You scumbag, you maggot
You taped over Taggart."

I'll leave this subject with the words of the song's writer, Shane MacGowan:

"The word was used by the character because it fitted with the way she would speak and with her character. She is not supposed to be a nice person, or even a wholesome person. She is a woman of a certain generation at a certain time in history and she is down on her luck and desperate. Her dialogue is as accurate as I could make it but she is not intended to offend! She is just supposed to be an authentic character and not all characters in songs and stories are angels or even decent and respectable."

And I'll close with a rather seasonal and magically inexplicable Swedish matchbox image contributed by Mark. I think it may just possibly have lost (or gained) something in translation. 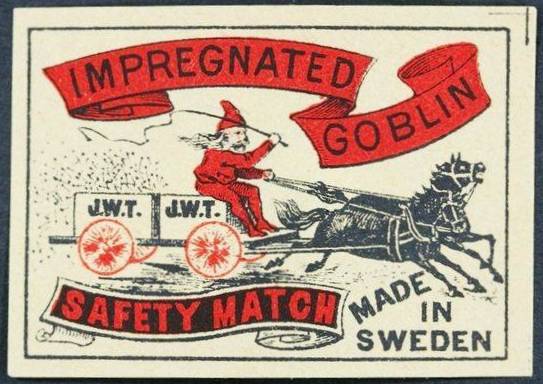